I have been waiting for Yarndogs to get a copy of Berocco's Norah Gaughan Vol 3 to cast on my new project. It is Loppem by Norah Gaughan. 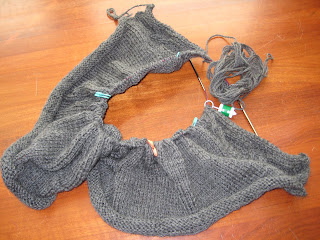 I am knitting it in Cascade 220 which I had bought a couple of years ago to make sweaters for the boys, before the realization that handwashing sweaters for my own wee hooligans would not be the best idea. I, by contrast, don't tend to get my clothes actually dirty very often so handwashing is not a problem. I had seen a sleeveless waistcoat in the shops in the UK and this is my alternative...the one in the shop (Fat Face) was grey, so this had to be grey also.

I seem to have acquired a 2nd edition of the book, which looking at the errata and comments on Ravelry, is a good thing.
Posted by Alison at 7:20 PM

I hope Loppem looks as good as the turban!