Adam and I needed an adventure today - and we managed to find one here: Icerair 2007 . We had a blast!
Edited to include a photo take in the giant snowglobe at AT&S Park: 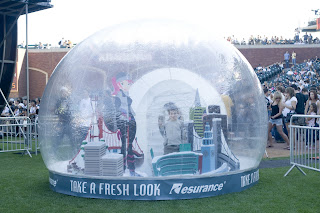 We started off in the village area cleaning up on stickers and made our way to the bmx park to watch the amateur competition. We then headed over to AT&T Park to watch the Big Air preliminary competition: Snowboard and Ski jumping from a huge snow-covered ramp erected in the stadium. It was a pretty exciting competition - we enjoyed the ski jumping better than the snowboards.

We also watched some competitors practising for the pro skate and bmx Vert (20' high half-pipe for skateboard and bmx).

After the competition we headed back to the village to watch the bmx professionals practise for a while before we headed home exhausted. While I prepared dinner Adam practised tricks on his 'bmx bike', aka the bike he got for his 2nd birthday...which has a suitable small scale to stand in. He tells me he is already saving for a bmx of his own!

No digital photos - but we did buy a disposable camera so Adam will have some pics of himself being nearly brained by flying skateboards and flying cyclists.
Posted by Alison at 7:00 PM