We just came back from Finlay's preschool play.

He had told us that he was playing the part of "the main bird" but what we had failed to appreciate was that this was the lead role in "Papeto the scared bird". 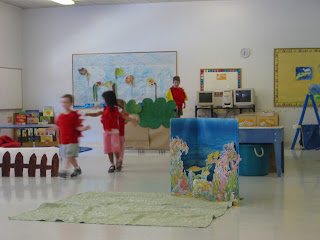 Papeto is too scared to fly when his siblings leave the nest, so he follows them to thier tree, by land, with the assistance of several other animals: a fox; a fish; a frog; and a gopher. 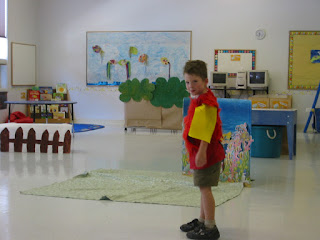 The other animals had a single speaking line, but Finlay had memorized all his lines and stage positions which formed the main part of the narrative.

We were really surprised and impressed that he had the confidence to stand up in front of all the parents in the class, and the children from the other classes. He spoke really clearly - which was great to hear! I think his speech therapist would be delighted with his progress.