More of Fin's Fablious Food. He decided he wanted to make a cheesecake after we ate a ready-made one. He has become quite snooty about making things from packets: "That's not cooking; cooking has ingredients" so I bought the ingredients for cheesecake from memory while shopping - then had to find a recipe that used ricotta and cream cheese since that is what I bought and not gelatin which many seem to be based on. We used this recipe: http://www.foodnetwork.com/recipes/food-network-kitchens/classic-cheesecake-recipe2/index.html, halved the quantities, and substituted ricotta for half the cream cheese.

Fin did all the mixing and measuring, and especially creating crumbs with the rolling pin. He was interested that we baked it in a bath of water. 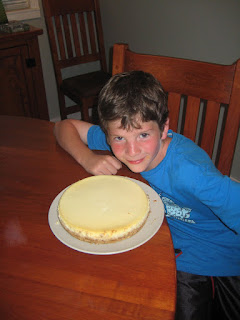 He was very pleased with it - and especially enjoyed taking it out of the spring-form pan. 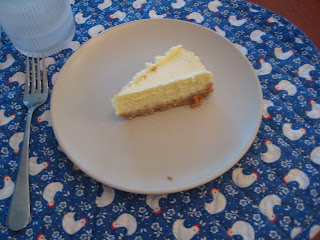 It was delicious! I was glad, however that we had made half the quantity - I think we will be eating it all week as it is.
Posted by Alison at 1:40 PM